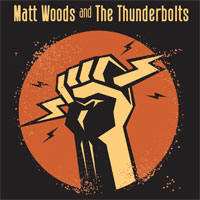 Lightning has struck again. The self-titled and much-anticipated follow-up to Matt Woods and the Thunderbolts’ widely lauded 2007 release, Be My Friend, became available last week to the delight of Central Iowa blues fans who have been clamoring for new music from guitarist/vocalist Matt Woods, drummer Michael “Thunderfoot” Swanger and bassist Scott Cochran. From the opening strains of “I Know You Don’t Love Me,” to the final notes of their scorching rendition of Junior Kimbrough’s “All Night Long,” it’s readily apparent that not only does this collection of 10 originals and two covers match its predecessor in song and sound quality , it tops it. While the opening five salvos impress, it’s tracks 6 – 10 that show why the band are two-time Iowa Blues Challenge winners. Instrumentals “B.O.G. Boogie” and the almost Dick Dale-like surf tune “On the Loose,” have the band locked in and absolutely grooving. The highlight of the album, though, is a gem nestled between those tracks, the mid-tempo, haunting “I Can’t Live Without You” and its beautiful, mimicking guitar and vocal phrasing. In all , “Matt Woods and the Thunderbolts” is simply homegrown blues at its best and easily one of the best releases — top to bottom, in any genre — in a very long time. Get struck.