Browse: Home / Be My Friend 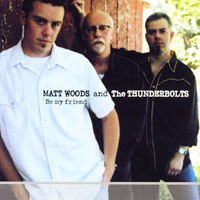 These blistering blues will get you spinning out on a cool midnight ride to the crossroads. A mess of standards, such as “Goin’ to Brownsville” (Sleepy John Estes), “Jumper on the Line” (R.L. Burnside), “Shake ’Em on Down” (Fred McDowell), and “Death Letter” (Son House), and a fistful of originals from Matt Woods and the Thunderbolts just might send you straight off to the South Side of Chicago, the Texas Hill Country, and the Mississippi Delta to shake hands with the devil and cut a deal, for sure. Woods plays and sings like an old tattered soul still hacking out a living with a mule on 40 acres, and his slide guitar on songs like “Stop That Grinnin’ ” will leave you gasping for breath. (George Thorogood — watch your back, man). And the Thunderbolts ain’t no deadwood, neither, with their straight-on, hearth-thumping rhythm section, compliments of [Dirty Linen contributor] Michael Swanger and Scott Cochran. Matt Woods and the Thunderbolts have torn up the cornfields of their native Iowa and shared the stage with such blues giants as Hubert Sumlin, James Cotton, Eddy Clearwater, and Willie “Big Eyes” Smith. Shake some action, and hide the womenfolk — these boys mean business.